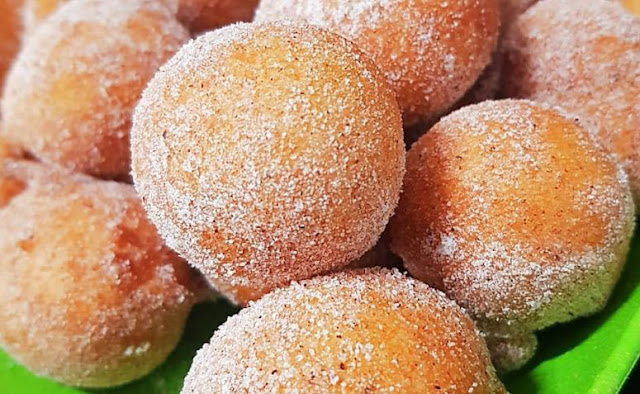 ‘Bolinhos de Chuva’ or ‘Rain Drop Doughnuts’ are named because of their rain drop shape which is created when the batter is dropped into the cooking oil, browning little peaks form that look like rain drops.

In a small bowl mix the cinnamon and ½ cup of sugar together and put to one side. In a large bowl, add the margarine (room temperature), eggs and sugar and mix well with a whisk. Now stir in the flour and the milk and mix well until the mixture has the consistency of a very thick cake batter (if not, add a little more flour). Meanwhile, in a large deep fat fryer heat the oil to a medium temperature. Using one tablespoon, scoop a full tablespoon of batter and using another tablespoon, carefully scrape the mixture off the first tablespoon into the cooking oil. Turn occasionally and cook until golden brown all over. Chef’s tip: “Don’t make your doughnuts too big as they brown on the outside quickly and will not be cooked inside. The inside needs to be like a baked cake.” Roll your doughnuts in the bowl with the cinnamon and sugar whilst still hot so the sugar and cinnamin stick to the doughnut. Do in batches. Best served warm.